Superstar Dharmendra is very proud of his grandson Karan Deol and he is often seen expressing his feelings towards him through his tweets and Instagram posts. The actor recently applauded Karan Deol for his humble and kind nature. He also mentioned that kindness runs in their legacy. The legendary actor took to his Twitter handle and shared a video of Karan Deol happily agreeing with his fans for photos. In the video some street kids request Karan to click pictures with them and Karan patiently clicks pictures with them. When Karan is being clicked by the media the children are again seen requesting Karan for pictures. The Pal Pal Dil Ke Paas actor once again agrees and smiles while clicking pictures. 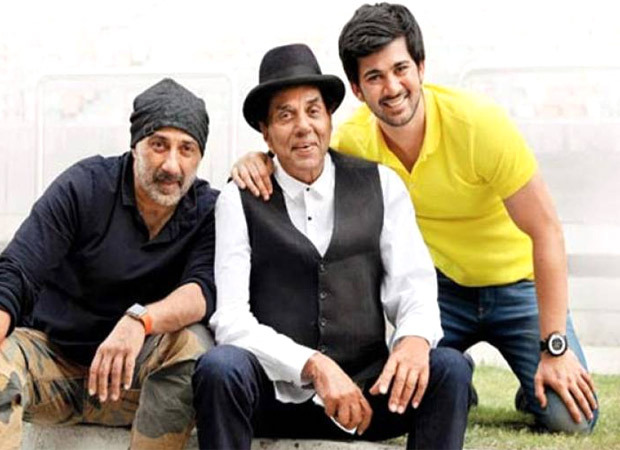 This humble gesture of Karan caught the attention of his grandfather Dharmendra who not only shared his video but also appreciated his ‘milansaar Fitrat’. The Sholay actor uploaded the video on Twitter and captioned it,”karan , milansaar fitrat ye….. wirse mein  naseeb hoie hai tujhe….. keep it up it’s his great blessing. Love you”. Below the video he again wrote, “Karan , love you. You are as humble as your great Grand mother. It is her greatest blessing not only to her loving family but to every human being on this earth keep it up”. Being a doting grandson of Dharmendra, Karan Deol replied to his tweet and said, “Love you bade Papa”.

Karan Deol’s Bollywood debut Pal Pal Dil Ke Paas opposite Sahher Bambba flopped at the box office. But he is gearing up to make a comeback with Velley and Apne 2 with his Deol clan Dharmendra, Sunny, and Bobby.